To maintain the stability of the entire infrastructure, systems and network administrator primary goals are to:

For these administrators to accomplish their goals, system monitoring plays a pivotal role. It is extremely important and is a key component of any computer system. Monitoring a computer system typically includes installing management software on the device that needs to be monitored and is authenticated to a monitoring server. There is no shared definition of the term ‘system monitoring’ as it varies based on how a system administrator uses it. In its simplest form, system monitoring is defined as a process of continuous scanning, and gathering of different data of different systems over a period of time.

There are so many reasons why monitoring is needed, it includes but not limited to:

In every Linux flavor, it comes with a program called free where it would display the amount of free and used memory in the system at the time of its execution.

As seen in the image above, free program is used with -m option to display values in megabytes. Here are some of the definition of the items displayed there:

This line indicates swap details. In this case, the server doesn’t have a SWAP space available, that’s why it’s returning 0. Installation of SWAP spaces is always optional. Swap is a virtual memory created on HDD to increase RAM size virtually.

Same like with the free command to check memory utilization, there are also different tools to see the CPU utilization (e.g. top, htop, uptime, tload etc.).

Starting with the most comprehensive one, the top program. It basically displays Linux processes. It also provides a dynamic real-time view of a running system. It can display system summary information as well as a list of processes and threads currently being managed by the Linux Kernel. 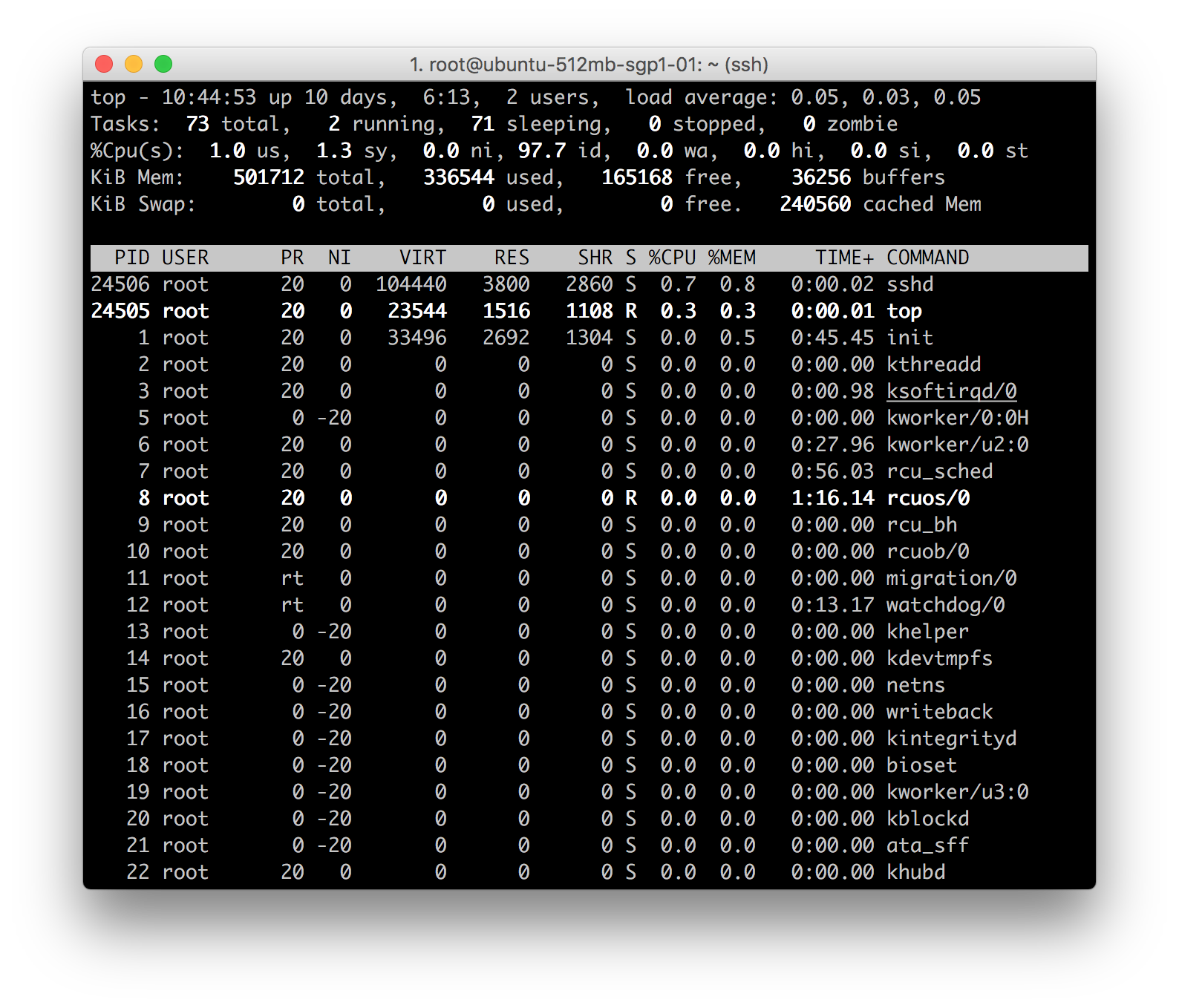 This line indicates how the CPU is used. If you sum up all the percentages the total will be 100% of the CPU. Let’s see what these values indicate in order:

The fourth and fifth rows respectively indicate the use of physical memory (RAM) and swap (same results with program free).

And as last thing ordered by CPU usage (as default) there are the processes currently in use. These are the different information we can get in different columns:

Uptime program. It gives a one line display of the following information. The current time, how long the system has been running, how many users are currently logged on, and the system load averages for the past 1, 5, and 15 minutes.

tload program. It prints a graph of the current system load average to the specified tty (or the tty of the tload process if none is specified).

htop program. It is an interactive process viewer. It is similar with top but allows it is allowed to scroll vertically and horizontally, so all the processes running on the system can be seen, along with their full command lines. 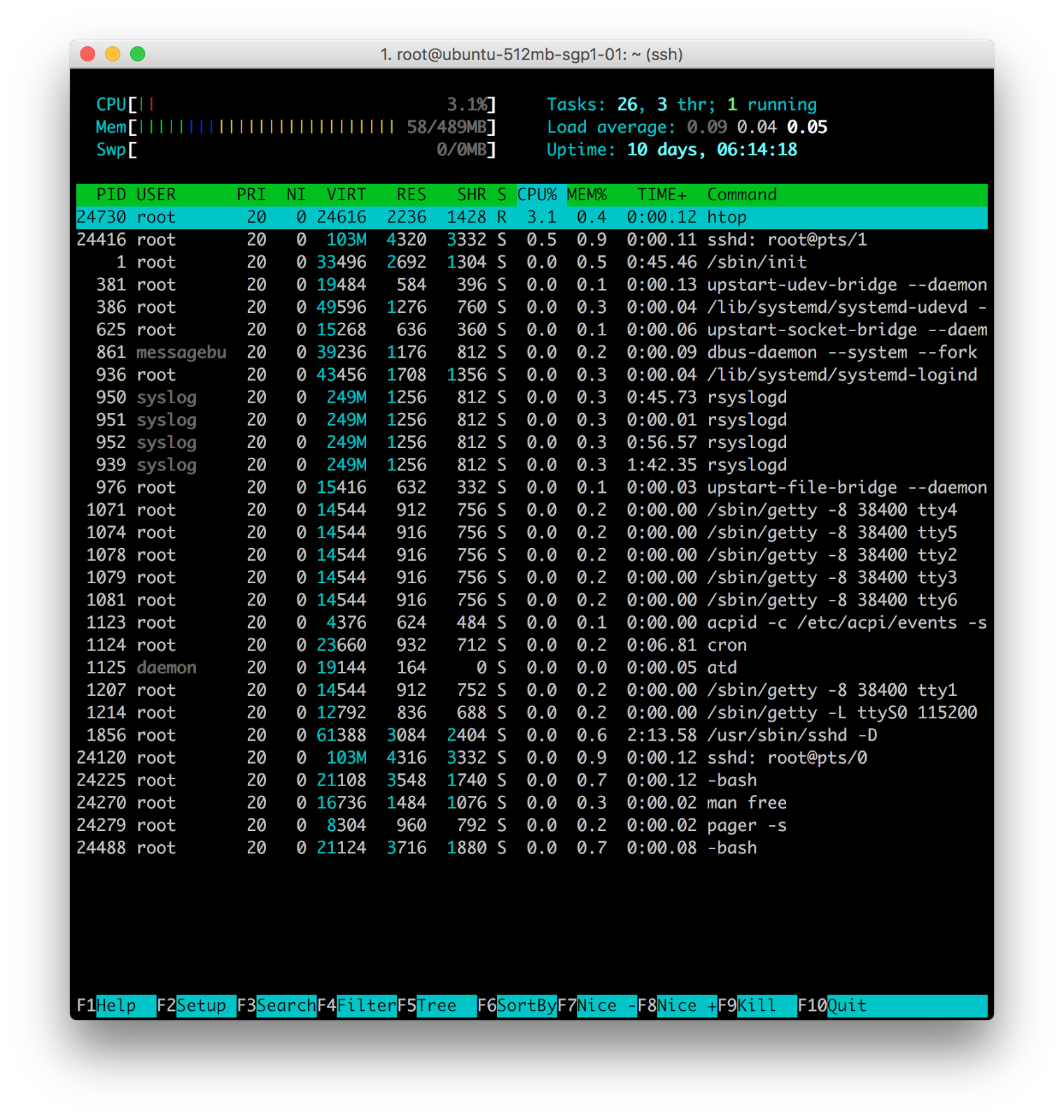 As seen from the previous tools, it is present in all the 3 programs presented above (values vary only because it was captured at different times) but one thing in common, it is always 3 values. But what do these 3 numbers mean?

Load Average is the average number of processes which are running or waiting to be executed per minute, five and fifteen minutes. These values do not depend on the number of processor cores, but the more cores you have, the more processes can be run simultaneously. So, for example, when Load Average is 3 on a one-core machine - it is overloaded, while on a quad-core machine it is a normal working load.

Normally, when disk performance is being discussed, there are always two things being monitored, IOPS and disk space. Disk space is just how much of the disk space is being utilized while IOPS is the standard unit of measurement for I/O (Input/Output) operations per second. In a layman's term, IOPS is just the read/write performance of the disk. There are also built-in tools in Linux flavored machines that monitors these:

The program df is used with -h option to make the values human readable. Column names are basically self-explanatory. Filesystem is the partition created while Mounted On is the mount point the partition is accessible.

iotop program. This is a simple top-like I/O monitor. 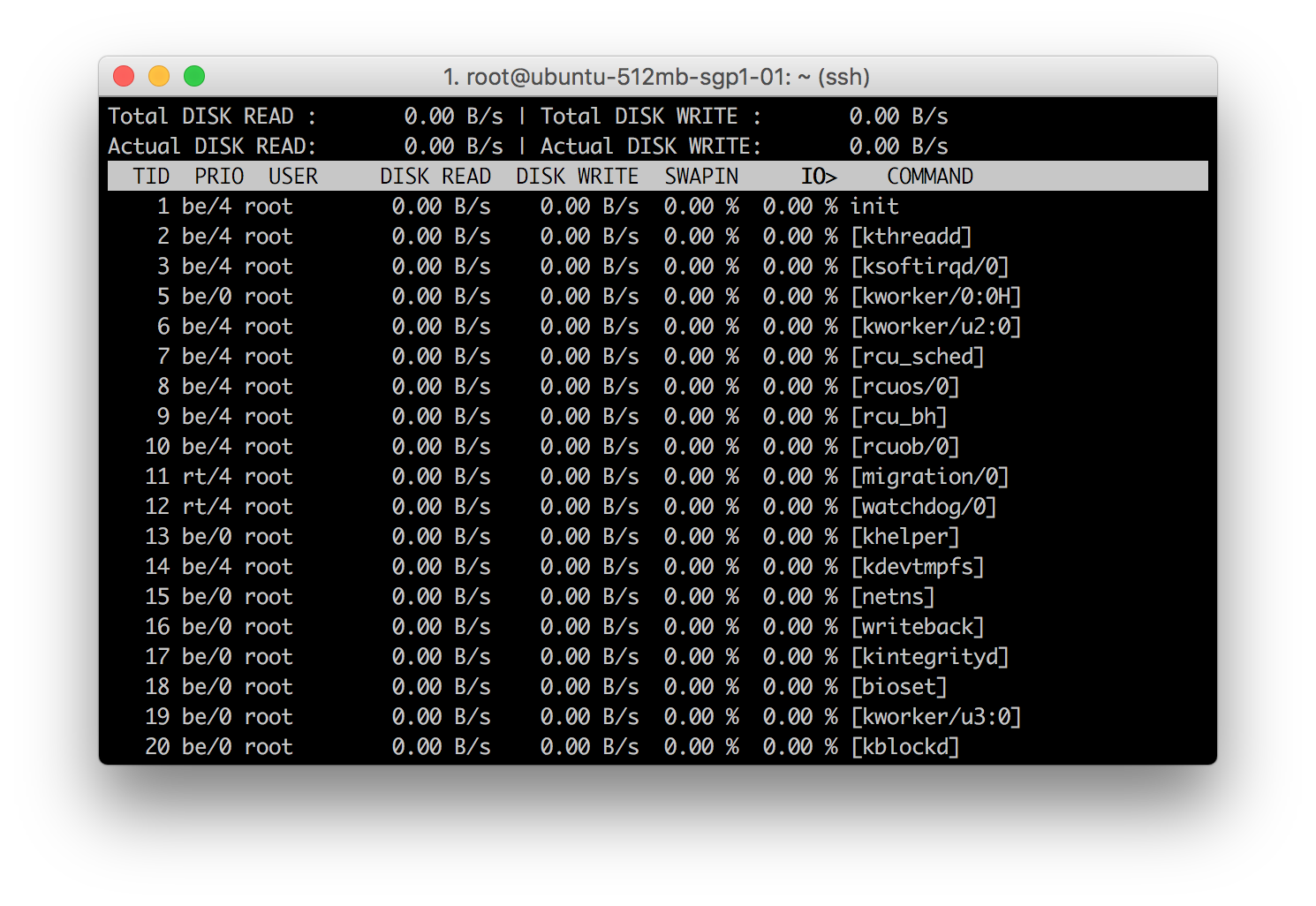 iotop displays columns for the I/O bandwidth read and written by each process/thread during the sampling period. It also displays the percentage of time the thread/process spent while swapping in and while waiting on I/O.

As illustrated above, monitoring can be implemented very easily. In Linux, aside from the fact, the data are already present, it also comes with free programs and tools to monitor it. It’s only up to the system administrator to implement it in such a way that it would be easier and be more human readable to a non-technical person.

Monitoring really does come with a lot of benefits. Namely:

Most of the time, monitoring all systems and setting up a thorough and finely tuned alert coverage requires effort and time. But with the right tools and proper understanding of the entire infrastructure, and application stack of a system, a manual approach that covers problems before, during and after an incident occurs, system monitoring can at least lessen these frequently occurring problems and maybe teach a system how to react the next time it happens.

Subscribe for our newsletter
to get the latest news & updates!
22 June 2016

Encryption: how to protect your data from third party access